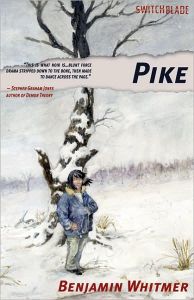 When you hear enough of the right voices whisper the right names, you think, maybe, there’s something to this. Pike is one of those book titles that rattle around in the recommendation and favorites lists. Naturally, you think you’ll get to it eventually. And then new stuff comes out, more flamboyant covers and titles cross your desk and fill out your bookshelves. Those titles lose their luster, the intrigue of those covers die out, but Pike still calls to you on the periphery. It calls to you. Authors praise Whitmer, and how this little book has changed them, influenced their writing.

Maybe I’m too cynical for my own good. I had a difficult time believing that this book was going to be any good. Based on what? I don’t know. The summary sounds pretty neat. Three old men connected to each other by a mouthy little girl. Blood. Violence. Gore. Enough smoking to give virgin lungs cancer. A prolific use of the word fuck. You’d believe I’d be all over this book from the second it crossed the threshold of my home. But it sat.

Yesterday, Pike used up and wore out nine hours of my life. I picked it up thinking that I’d read a few chapters and get to more later. Wrong. Dead wrong.

I read that bad bitch from cover to cover. Whitmer straps you down and force feeds you this book. That little girl walks into the diner and meets Pike for the first time, calling him a fucking pedophile. She’s twelve. At first it’s jarring, but as she continues to carry on, she’s clearly a rascal to the grizzled old Pike. You need to see where this goes, how the drama plays out. The violence is plentiful, the gore a main character.

What rings true throughout is Whitmer’s prose. The man is a poet. I haven’t been this conflicted about a novel in a long long time. On more than one occasion, I knew I should have been repulsed by what I was reading, but was more than compelled to keep going with the beautiful word choice. I can’t say enough nice things about this book. If you’re into southern gothic books, Pike is your jam. I guarantee it.